Giant Hogweed Is Bad, But This Wild Parsnip Plant Is WORSE 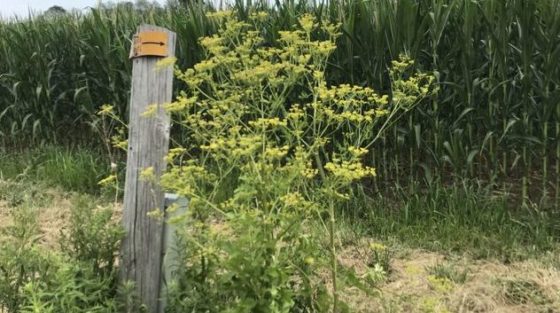 Reports of the giant hogweed burning, blistering, and blinding both humans and animals have been going around lately.  But there’s another plant we should worry about that’s even worse: the wild parsnip.

Giant hogweed and wild parsnip are closely related; both are a part of the taxonomic family Apiaceae that also includes carrots, celery, parsley, coriander, and fennel. Wild parsnip is more dangerous than the giant hogweed mostly because it’s more abundant.  It has burned and blistered more people than the giant hogweed has.  According to The Democrat and Chronicle, the spindly plant with yellow-green flowers is all over the place, it’s uncontrollable, and it has a bite. “We have a lot of people that call with wild parsnip burns,” said Naja Kraus, who heads New York state’s effort to control giant hogweed.

Wild parsnip, sometimes also called hobo parsnip, is the free-range version of the well-known root vegetable. Like the giant hogweed, it made it’s way to the Americas from Eurasia and is now a noxious weed; and dangerous ones at that.  One woman, horribly found this out the hard way.

According to Fox 10 Phoenix, a woman from Vermont received the equivalent of second-degree chemical burns to her legs after falling into a wild parsnip plant. She now wants to warn others to look out for this seemingly innocent plant. Around the first of July, Charlotte Murphy, of Essex, Vermont, was traveling to the southern part of the state for her internship with a local artist. When she stopped on the side of the road, she lost her footing and fell into the plant, breaking it, causing the sap from the wild parsnip plant to come in contact with her bare legs.  She was left with yellow colored blisters on her legs. 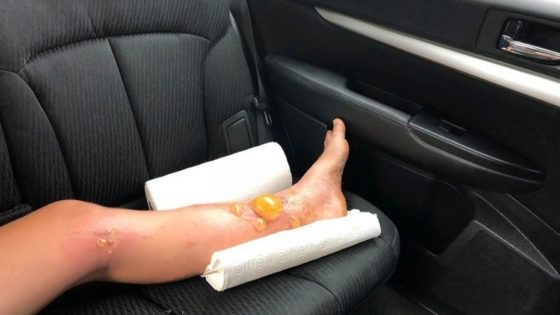 To identify a wild parsnip, look at its leaves, flowers, and unique stem:

Safety measures should be taken if you attempt to remove a wild parsnip. Much like the giant hogweed removal process, don’t use a weed whacker or mower on these plants, as that will cause the sap to leak our everywhere.  Wear gloves and long sleeves if carrying the plant after removal. If your skin contacts the plant at any time and for any reason, wash the area immediately with soap and water and seek medical attention.

*Cow parsnip is often mistaken for giant hogweed.  Please go here if you would like to familiarize yourself with the differences.

This is extremely important information and we urge you to pass this on to everyone that you know. Thank You!