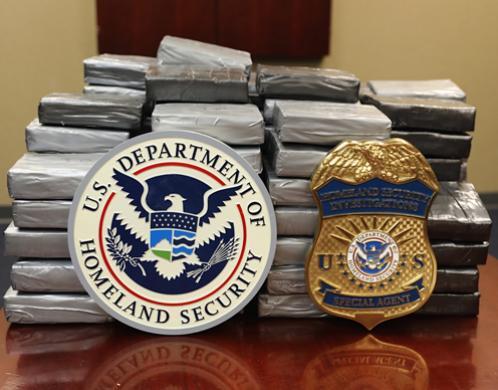 According to a criminal complaint filed by the Special Narcotics Prosecutor’s Office (SNP) charges Bronx-based ringleader Jorge Pizarro and co-defendants Nelson Dejesus and Miguel Angeles with Criminal Possession of a Controlled Substance in the First and Third Degrees.  The defendants were arrested the night of Saturday, March 18 in the vicinity of a Secure Self Storage located in the Bronx, NY. Tuesday, special agents and officers conducted additional court authorized searches of a U-Haul and a Dodge Caravan that were seized from the location at the time of the defendants’ arrests.

At the outset of the investigation, members of HSI EDTF learned that Pizarro allegedly oversaw an interstate narcotics trafficking operation that transported large quantities of heroin from Texas for sale in New York City and Lawrence, Mass. Shipments of narcotics were concealed inside furniture that Pizarro stored inside a Secure Self Storage unit leased in his name. Members of HSI EDTF and DEA DETF developed further intelligence that Pizarro also transported large quantities of cash to pay for the narcotics from New York City back to Texas inside the same wooden furniture.

“Using furniture that contained hidden compartments, these individuals ran a large interstate drug trafficking organization that flooded our streets with heroin,” said Angel M. Melendez, special agent in charge of HSI New York. “The seizure of over $4 million dollars in US currency shows how lucrative the drug trade is but also severely hinders the drug traffickers who were supposed to receive it.”
take our poll - story continues below
Completing this poll grants you access to Right Wing Tribune updates free of charge. You may opt out at anytime. You also agree to this site's Privacy Policy and Terms of Use.

Members of DETF Group T-31 established surveillance targeting the storage unit and Pizarro. Special agents and officers learned that Pizarro and Dejesus moved furniture in and out of the storage unit on a near-monthly basis. Pizarro also travelled between New York City and Lawrence, Mass.

“Drug traffickers hid in plain sight carting drug and money-laden furniture cross country.  This isn’t the first time drug traffickers have used ingenious methods to smuggle drugs, but it was a well-planned scheme,” said DEA Special Agent in Charge James J. Hunt. “The organization thought of every detail, from adding a tricycle to their stash of furniture in order to appear like a relocating family, to spraying the contents with repellant to ward off police K-9 units.  By seizing this money, law enforcement has denied Mexican drug traffickers over $4 million of profit off their poison.”

On Saturday, March 18, special agents and officers with DETF and HSI observed Pizarro and Dejesus moving multiple pieces of furniture into and out of the unit. At approximately 12:30 a.m., Pizarro moved several pieces of furniture, including two wooden nightstands, into the storage unit. The Office of the Special Narcotics Prosecutor obtained a court authorized search warrant for the location.

That night, Pizarro, Dejesus and Angeles were observed returning to the Secure Self Storage in two vehicles, a black Dodge Caravan driven by Pizarro and a large U-Haul truck. The three defendants went in and out of the storage unit, loading multiple pieces of furniture into the U-Haul truck.  HSI’s Special Response Team (SRT) members approached the storage unit and affected the arrest of three individuals.

Special agents and officers executed the search warrant on the storage unit and recovered three kilograms of heroin weighing more than six pounds from one nightstand and approximately $750,000 cash from a second wooden nightstand. Both nightstands were outfitted with hidden compartments. The Dodge Caravan and the U-Haul truck were seized.

Tuesday, special agents and officers executed additional search warrants that were obtained by the Special Narcotics Prosecutor’s Office for the vehicles. Inside the U-Haul truck, special agents and officers found three pieces of wooden furniture that contained approximately $3.4 million dollars in cash wrapped in dozens of packages. The pieces of furniture were outfitted with secret compartments. The Dodge Caravan contained a large empty compartment in the floor. A bottle of fox urine, intended to be used to disguise the smell of narcotics, was recovered from the glove compartment. Law enforcement learned that the U-Haul had been rented in Lawrence, Mass. by an individual who has not been apprehended and is also the owner of record for the Dodge Caravan.

The charges in the indictments are merely accusations. The defendants are presumed innocent until proven guilty.

Situation Update – An astonishing theory: FEMA and the US military will save America at its final hour
January 15th, 2021 DC Clothesline

Situation Update – An astonishing theory: FEMA and the US military will save America at its final hour
January 15th, 2021 DC Dirty Laundry
Follow Me On Twitter!
Follow @DinoPorrazzo