Top CIA Expert: China Is Waging A Quiet ‘COLD WAR’ Against The US 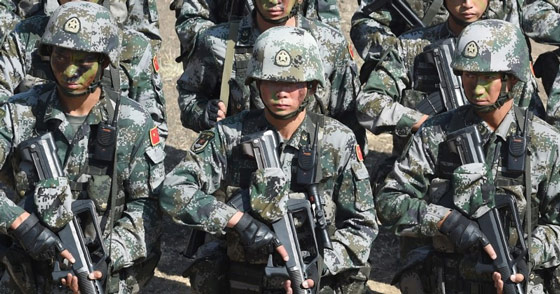 According to one top CIA expert, China is waging a quiet Cold War against the United States. Although China doesn’t really want a war with the U.S., they are quietly preparing and undermining the nation in ways that aren’t obvious to everyone else, says Michael Collins, deputy assistant director of the CIA’s East Asia mission center.

“I would argue … that what they’re waging against us is fundamentally a cold war — a cold war not like we saw during THE Cold War (between the U.S. and the Soviet Union) but a cold war by definition,” Collins said on Friday at the Aspen Security Forum in Colorado, according to CNBC.

And apparently, the rising tensions go far beyond what is being publicized about the trade war (one most economic experts feel the U.S. cannot win) initiated by the Trump administration. But Collins is also concerned about China’s pursuit and subsequent attempts to steal business secrets and as many details as possible about high-tech research being conducted in the U.S. While the Chinese military is continually expanding and being modernized under communist “president”  Xi Jinping, (who voted himself  president forever) the U.S., as well as other nations, have whined repeatedly about the Asian nation’s construction of military outposts on islands in the South China Sea. “I would argue that it’s [China’s military expansion and attempts to surpass the U.S. as an economic superpower] the Crimea of the East,” Collins said, referring to Russia’s brash annexation of Ukraine’s Crimean Peninsula, which was condemned throughout the West.

Marcel Lettre, former undersecretary of defense for intelligence, said China has the second-largest defense budget in the world, the largest standing army of ground forces, the third-largest air force and a navy of 300 ships and more than 60 submarines.

“All of this is in the process of being modernized and upgraded,” said Lettre, who sat on a panel with Collins and Thornton. -CNBC

According to Franklin Miller, former senior director for defense policy and arms control at the National Security Council, said these advancements in technology leading to China’s advanced weapons developments are emphasizing the need to have a dialogue with Beijing.

FBI Director Christopher Wray said China, from a counterintelligence perspective, represents the “broadest and most significant threat America faces.” He said the FBI has economic espionage investigations in all 50 states that can be traced back to China. “The volume of it. The pervasiveness of it. The significance of it is something that I think this country cannot underestimate,” Wray said.

But the U.S. is counter waging the same “Cold War” against China, as tariffs are continually threatened and added and a trade is expected to be paid for by the wallets of Americans, hurting the Chinese minimally. The U.S. economy appears to look strong on the surface,  but most experts have been warning that this trade war could be the nail in the coffin of the U.S. dollar and economy.