New Venomous Snake Discovered Is Already At Risk For Extinction 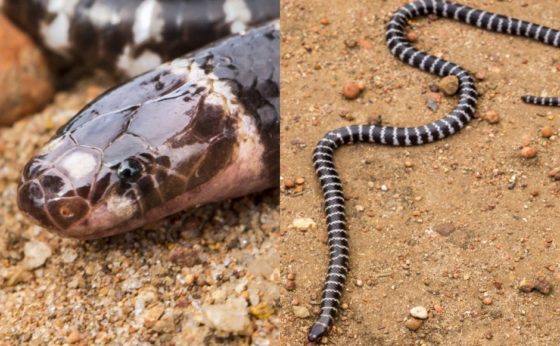 A team of biologists happened to stumble across a new venomous snake while on a mission to research sea snakes. But the scary new snake they discovered just happens to already be at risk for extinction.

The new snake was found in Australia by a research team of biologists which is led by University of Queensland’s Associate Professor Bryan Fry. The new species of bandy-bandy snake was found at Weipa, a town on the west coast of the Cape York Peninsula, in the far northeast of Australia, according to Fox News.

Fry said bandy-bandies were burrowing snakes so they were surprised when they found it on a concrete block by the sea, after coming in from a night of sea snake spotting. “We later discovered that the snake had slithered over from a pile of bauxite rubble waiting to be loaded onto a ship,” he said.

The black-and-white snake is now named Vermicella parscauda or the Cape York bandy-bandy. The bandy-bandies typically live in burrows and feed on a specialized diet of blind snakes.  So far, scientists actually only know of five species of bandy bandies, all found in Australia. The hoop snake (Vermicella annulata) is the most commonly encountered bandy-bandy, the researchers reported in a study published in Zootaxa.

The team has so far found only six individual snakes of the Cape York bandy-bandy species in the Weipa area. This site has large-scale bauxite mining that involves extensive digging, which could be affecting the naturally burrowing bandy-bandy, the researchers write.  The team is yet to do a detailed assessment of the abundance, distribution and potential threats to the species, but say the bauxite mine, and the activity around it, could endanger or present the threat of this snake’s extinction.

“Bauxite mining is a major economic activity in the region, and it may be reshaping the environment to the detriment of native plants and animals,” Fry said about the potential dangers to the newly discovered snake.  “Every species is precious and we need to protect them all since we can’t predict where the next wonder-drug will come from,” he added.

“The discovery of this enigmatic little snake is symptomatic of the much more fundamental problem of how little we know about our biodiversity and how much may be lost before we even discover it.”