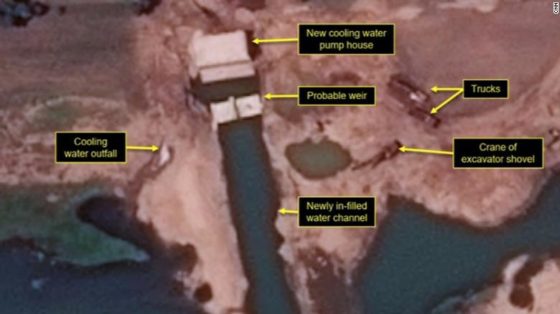 Satellite images show that the North Korean regime is continuing to make improvements to its nuclear facility in the wake of Kim Jong-Un’s meeting with Donald Trump. North Korea has made rapid improvements to the infrastructure at its Yongbyon Nuclear Scientific Research Center.

Commercial satellite imagery from June 21 indicates that improvements to the infrastructure at North Korea’s Yongbyon Nuclear Scientific Research Center are continuing at a rapid pace. Modifications to the 5 MWe plutonium production reactor’s cooling system appear complete, but a less-than-normal cooling water discharge from the outfall pipe makes a determination of the reactor’s operational status difficult. The status of the Radiochemical Laboratory—used to separate plutonium from spent fuel rods—remains uncertain, although the associated Thermal Plant has likely continued operations, and a small non-industrial building of an unknown purpose has been newly erected near the cooling tower. Construction continues on support facilities throughout other operational areas of Yongbyon, especially at the Experimental Light Water Reactor (ELWR), where the new engineering office building appears externally complete and a small building similar to the one observed at the Radiochemical Laboratory has been erected. –38 North

Until specific orders are issued from Pyongyang, it is expected that North Korea will continue to conduct business as usual.  In other words, improvement to the Yongbyon facility should not be seen as having any relationship to North Korea’s pledge to denuclearize, says the report by 38 North.

“No change is actually a pretty significant story … this is still an active site producing plutonium for North Korea,” according to Jeffrey Lewis, a professor at the Middlebury Institute of International Studies. According to CNN,  Secretary of State Mike Pompeo said Wednesday that North Korea remains a nuclear threat, but defended president Donald Trump’s previous comment that the regime doesn’t pose as much of a threat. “I’m confident what he intended there was we did reduce the threat,” said Pompeo. “I don’t think there’s any doubt about that. We took the tension level down. I think his [Trump’s] point was a fair one,” he added. “For the moment, we have reduced risk.”

The new images released on Wednesday lend credence to Defense Secretary James Mattis’ assessment that Pyongyang remains in a holding pattern while diplomatic negotiations continue. “The summit pledge is important, but it was not a written agreement that laid out what the North Koreans have to do — that doesn’t exist right now, so I’m not surprised they are continuing to operate their facilities,” said Joel Wit, a Senior Fellow at the Stimson Center and Director of 38 North.

“Because Kim Jong-Un has so far avoided making a commitment to halt research and development activities, the changes are not a success or failure of the diplomatic process, but simply a signal that North Korea’s nuclear infrastructure remains fully in use,” Adam Mount, a senior fellow, and director at the Federation of American Scientists stated to CNN.

“What is needed now is sustained and direct negotiations between the two sides on a framework for phased steps on denuclearization, as well as concrete steps toward a peace regime on the Korean peninsula,” according to Kingston Reif, director for disarmament and threat reduction policy at the Arms Control Association.