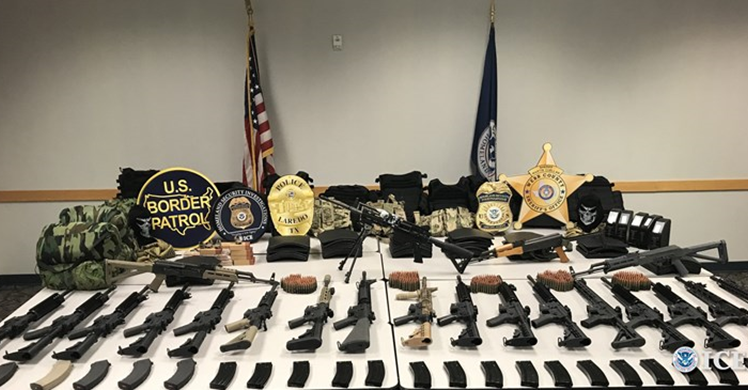 According to law enforcement authorities, in June 2018, Task Force members with Laredo’s High Intensity Drug Trafficking Area (HIDTA) were conducting surveillance of a downtown Laredo parking lot.  They witnessed an individual transfer boxes from one vehicle to another. Task Force members approached the individual and conducted a preliminary search inside the vehicle. During the search they discovered a large cache of weapons and other related merchandise. Law enforcement suspect that the merchandise was about to be smuggled to Mexico.

No immediate arrests were made in connection to the seizure.

HSI is the principal investigative arm of the U.S. Department of Homeland Security, and investigates a diverse portfolio of federal laws. HSI investigates violations of U.S. customs and immigration laws pertaining to border security, homeland security and public safety.

In fiscal year 2017, HSI special agents seized 5855 weapons and 673,327 rounds of ammunition, helping to keep communities safer both in the United States and Mexico.

HSI has jurisdiction to investigate the smuggling of weaponry into Mexico. Additionally, possessing a firearm with an altered or obliterated serial number is a violation of federal firearms laws.

Keep up the great work and I will tell you that most of Americans are extremely grateful for all you do to keep us safe.

President Trump Speaks About His Future Plans During Lunch At One of His Golf Clubs
January 22nd, 2021 Flag And Cross

ISIS Welcomes Biden To Presidency With A Double Suicide Bombing In Baghdad
January 22nd, 2021 The Lid

Did You See What The Last Administration Did Before Leaving Washington D.C.? Let’s Call It For What It Is…
January 22nd, 2021 Sons of Liberty Media