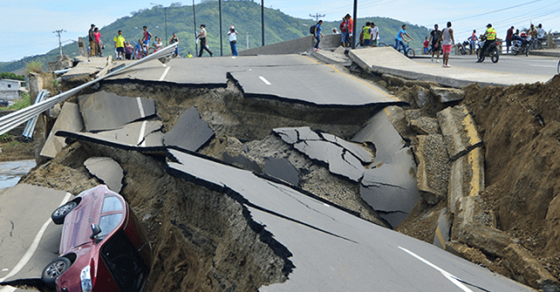 A massive earthquake many are calling “the big one” is overdue to strike California, either on along the San Andrea fault line or the Hayward Bay fault line.  But this earthquake is still a threat even to those who don’t live in the Golden State.

The second-largest city in the United States, Los Angeles, sits atop 100 geological faults. A big earthquake is an inevitable part of its future and almost everyone is afraid of that massive earthquake dubbed “the big one.” But this earthquake is a threat to many who have chosen to not reside in California.

Ten years ago, while at the U.S. Geological Survey I led a team that created the ShakeOut Scenario, our best scientific estimate of the consequences of a big earthquake on California’s San Andreas fault. We estimated about $50 billion in direct losses from the earthquake itself. The fires triggered by the earthquake would double those losses. The business disruption costs over the next six months caused by disruption to water, power, and transportation doubles the total again to more than $200 billion. –Lucy Jones, MarketWatch

But that $50 billion in losses translates to the national economy as well.  More than 40% of the total imports to the United States come in through the ports of Los Angeles and Long Beach. Even if the damage to those port facilities is minimal, the railway lines that carry goods to the rest of the country run across the San Andreas fault, where they will be upended 20 to 30 feet by a big earthquake. No other port on the West Coast has the capacity to pick up more than a fraction of that cargo.  Pipelines that carry fuel from the refineries in Los Angeles to supply most of the need in Arizona and Nevada also cross the San Andreas and will be broken. The transport of fuel and train cargo cannot resume until the fires started when those pipes break have been put out and the roads and railway lines can be repaired.

Effects will be felt across the country, not just by those immediately impacted near the fault lines. The true cost of a future California earthquake will only be seen in the years and maybe even decades after the actual event occurs. According to MarketWatch, one could argue that San Francisco never regained the central economic role it had before the 1906 earthquake. That’s the last time an earthquake above magnitude 7.7 hit the state. The cost of the next great earthquake will be seen in the ability of California communities to inspire their residents to stay, to put up with discomfort, inconvenience, and even deprivation to fight for the future of their homes.

Being prepared is the best way to shield yourself from any possible negative effects of a major earthquake in California. Since prepping is a daunting task and it’s often difficult to know where to start, we suggest a book titled The Prepper’s Blueprint.  It’s a great resource for those beginning a prepping regimen and for more advanced preppers who may have overlooked the economic impact of a California earthquake.