Kathy Griffin Goes On PROFANE Anti-Trump Rant: ‘F— Him! I’m Not Holding Back!’ 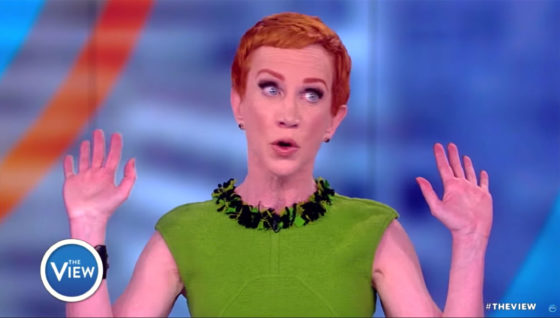 Comedienne Kathy Griffin went on a profanity-laced anti-Trump tirade on the left-leaning TV show The View.  She said, among other things, that she was taking back her apology for holding up a bloody mask in the likeness of President Donald Trump.

Griffin had to have her mic cut several times for using such profane language.  The 57-year-old once again took back her apology after she nearly lost her career for posing with a bloodied Trump mask in 2017. The imagery from her photoshoot with the mask was incredibly graphic.

“Yeah, I take the apology back,” she told the hosts of The View. “F— him. And Don Jr. and Eric, or as I call them Eddie Munster and Date Rape. I’m not holding back on this family. This president is different and I have been through the mill and so now I’m back on the road. I sold out Carnegie Hall in less than 24 hours.”

*Please be aware that although the profane language is censored in the video below, it may not be suitable for those at work. However, the video is entertaining if you’d like to see Griffin act like a grotesque lunatic for almost eight minutes straight.

Kathy Griffin makes a surprise appearance on “The View” to settle an old score with president Trump. The appearance comes several months after she received backlash for a picture she posted of Donald Trump on Twitter.

In the interview conducted with Whoopi Goldberg, Griffin says she now regrets apologizing for the picture and is no longer sorry for it. “I’m here. I’m alive. I’m just glad to be alive,” Griffin said. “By the way, I take the apology back. F**k him.” (Note: The View edited out the expletives from final production.)

“I’ve performed in Iraq and Afghanistan,” she explained. “Two places Trump has never been and can’t find on a map. Of course with my connection with the military I thought of literally Daniel Pearl’s mother and so I thought, OK, obviously not very many people literally witnessed that horrendous event, but when I thought of her I thought, OK, apologize,” she said, claiming her apology was only because of those who had experienced decapitation by terrorists directly.

“And then when I found out that I was really just kind of part of the Trump wood chipper which [comedienne] Michelle Wolf is in now and, you know, I didn’t know they had this apparatus already set up before my silly picture of a $5 Halloween mask and ketchup and wanted to make a statement about what a misogynist he is.”

Griffin added that while she doesn’t mean to disrespect the presidency, she believes Trump is different from previous presidents in office. She also added that it was “OK” for some to portray Barack Obama lynched and post it all over Facebook.  She must be delusional because it’s difficult to find anyone who thought that was “OK” and acceptable imagery.

“You know, I was doing stand-up for so long, there was a time in the Bill Clinton days you could make fun of that Monica [Lewinsky] dress all day long and nobody thought you were a terrorist,” she said. “But now, like, you said things have gotten not only politically incorrect but this administration and learned it firsthand because I got a call the next day from the Department of Justice and I was under a two-month federal investigation for conspiracy to assassinate the president of the United States. F– him!”

“I don’t blame the theater owners,” she said about her canceled events due to bomb threats. “Because they’re used to doing ‘Mamma Mia’ or ‘Stomp’ and all of a sudden it’s ‘I’m going to bomb Kathy Griffin in her va—-.’” Griffin’s mic was then cut off as she pointed down. “They were very specific,” she said, smiling.

When asked if she went too far, Griffin said she didn’t.