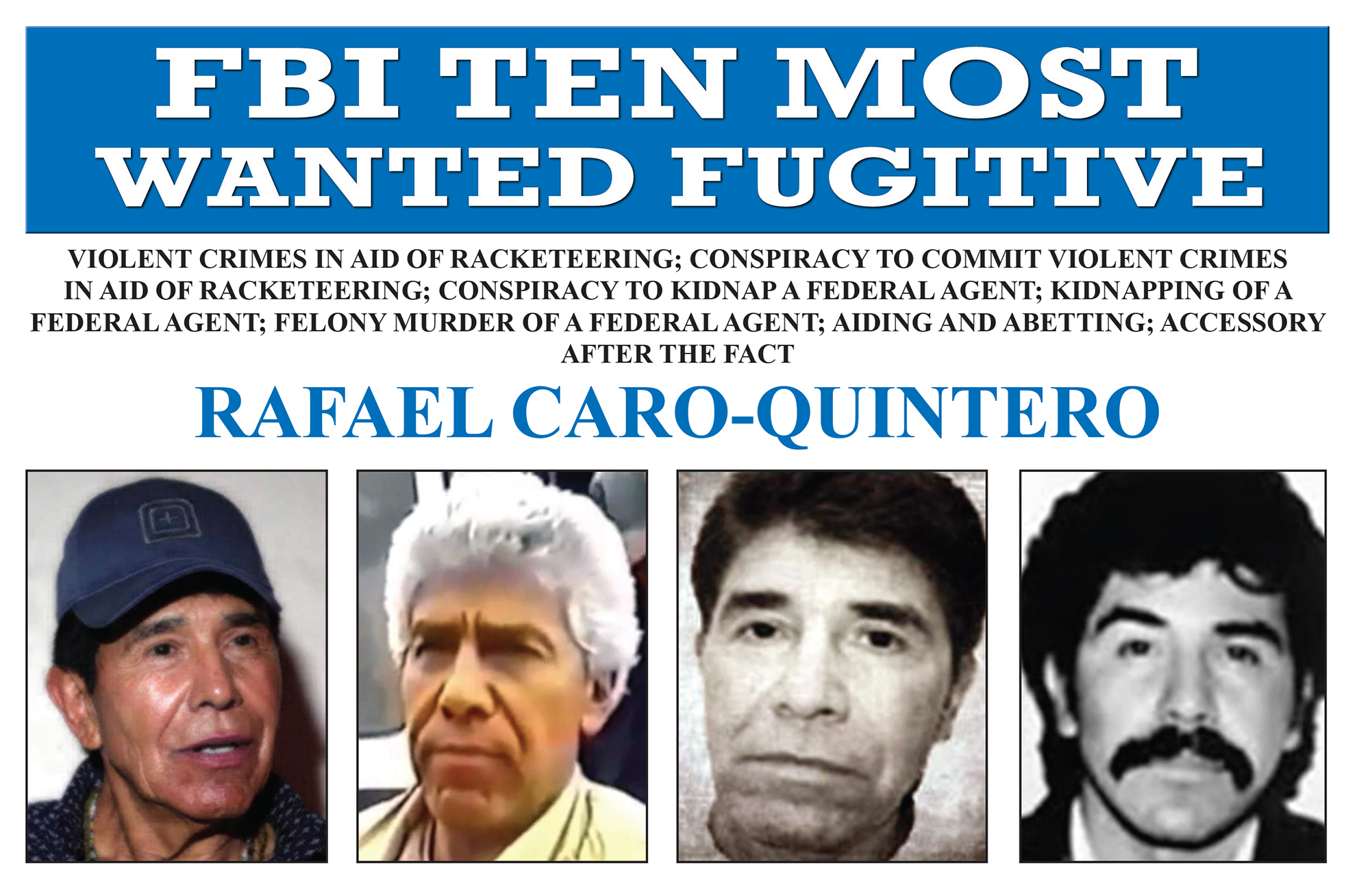 In addition, DEA and U.S. Attorney Richard P. Donoghue for the Eastern District of New York today announced the unsealing of an additional indictment against Quintero, alleging his role as leader of a continuing criminal enterprise and the individual responsible for the brutal murder of Camarena. The indictment also details his leadership role in trafficking methamphetamine, heroin, cocaine and marijuana into the United States and elsewhere and reflects his criminal activities from 1980 to 2017. (EDNY Docket No. 15-CO-208(S-2)

“Together with our federal partners at the DEA, the U.S. Marshals Service, and the U.S. Department of State, we are committed to bring to justice this dangerous criminal and cartel leader responsible for the brutal murder of a DEA Agent,” said FBI Deputy Director Bowdich. “Special Agent Camarena was devoted to stopping drug trafficking and breaking the cycle of drug-related crime. He showed tremendous courage to pursue the most violent drug traffickers, and it is because of his courage, and his selflessness, that we’re not going to stop looking for Caro-Quintero until we find him and put him back behind bars where he belongs.”

“The DEA is grateful for all of the federal law enforcement agencies that have committed to pursuing Rafael Caro-Quintero until the moment he is captured and returned to his rightful place in prison,” said DEA Acting Administrator Patterson. ‘Kiki’ Camarena holds a special place in our hearts and his sacrifice will always be remembered by the men and women of DEA who carry out our mission every day.”

“Our $20 million Narcotics Reward Program offer reflects the State Department’s commitment to the government-wide effort to track down Caro-Quintero,” said Deputy Assistant Secretary of State Walsh. “We’re pleased to be using the Reward Program to support this reinvigorated law enforcement effort, and at long last bring this criminal to justice.”

“The U.S. Marshals remain steadfast in the pursuit of justice for our brother, DEA Special Agent “Kiki” Camarena,” said U.S. Marshals Associate Director for Operations Derrick Driscoll. “We will continue to leverage all resources and work with our law enforcement partners here and in Mexico to develop the information that will lead to the capture of Rafael Caro Quintero.”

Caro-Quintero is widely regarded as one of the Mexican “godfathers” of drug trafficking, and helped to form the Guadalajara Cartel in the late 1970s. Allegedly, he became one of the primary suppliers of heroin, cocaine, and marijuana to the United States, and was in charge of the cartel in Costa Rica and the U.S./Mexico border.

In November of 1984, Mexican authorities raided a 2,500 acre marijuana plantation owned by Caro-Quintero. The Guadalajara Cartel blamed Special Agent Camarena for the takedown, and decided to retaliate.

Special Agent Camarena – a former Marine, fireman, police officer, and deputy sheriff – was extremely close to unlocking a million-dollar drug pipeline from Mexico to the United States in 1985. Before he was able to expose the drug-trafficking operations, he was kidnapped en route to lunch with his wife on Feb. 7, 1985, in Guadalajara, Jalisco, Mexico. Allegedly, the direct orders for the kidnapping came from Caro-Quintero. Camarena was surrounded by five armed men who threw him into a car, then sped away. It is believed that Camarena died within two to three days of his kidnapping, but his body was not found until March 5, 1985. Special Agent Camarena is survived by his wife and three sons.

The Department of State’s Narcotics Rewards Program is offering a reward of up to $20 million for information leading to the arrest and/or conviction of Rafael Caro-Quintero. Anyone with information concerning Caro-Quintero should take no action themselves, but should immediately contact the nearest U.S. Embassy or Consulate.

Caro-Quintero is believed to be in hiding in Mexico. He should be considered armed and extremely dangerous. If you have information regarding the fugitive, call 1-800-CALL-FBI (1-800-225-5324), contact the nearest U.S. Embassy or Consulate, or submit a tip online at https://tips.fbi.gov.

The FBI’s “Ten Most Wanted Fugitives” list was established in March of 1950. Since then, 484 fugitives have been apprehended or located – 162 of them as a result of citizen cooperation.

Additional information concerning Caro-Quintero, including his Wanted poster and the FBI’s list of “Ten Most Wanted Fugitives”, can be found by visiting the FBI’s website at www.fbi.gov.

Lives And Livelihoods Will Be Destroyed While Dems Wait Until 2021 For The Vaccine And Stimulus
November 25th, 2020 The Lid