Edelman told The New York Times that he was visiting his former teammate Danny Amendola late last month when an Instagram user identified as “jesseyi3” sent him this direct message: “Dude, there is a kid in your comment section says he s [sic] going to shoot up a school, i think you should alert the authority [sic].” 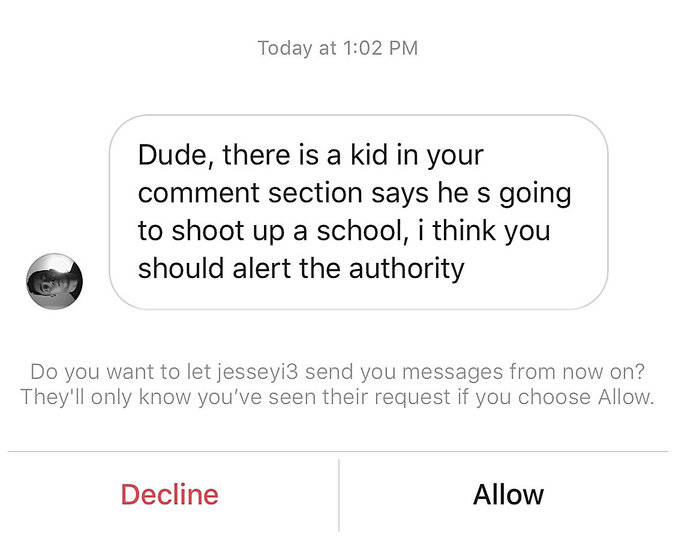 Moen located the comment by user “its_ya_boiii_aidan” under a photo Edelman posted March 25.

“I’m going to shoot my school up watch the news,” the comment read.

Moen called 911, and a police officer soon arrived. The officer saw the screen shot, then called her chief, who sent two detectives to Moen’s house. The detectives collected some information about the person who posted the threat. They then returned to their office, where they made an emergency records request for account information, which allowed them to determine the sender’s email and IP address, which was traced to Port Huron, Mich.

The detectives called police in Michigan, who immediately drove to the house where the threatening message originated. When the police arrived at the address, they found a 14-year-old boy, who, they said, admitted to posting the threat.

They also found two rifles that belonged to his mother, according to Capt. Joseph Platzer of the Port Huron Police Department.

Platzer said the boy’s threat was aimed at the middle school that he attends in a nearby township. The boy was taken to a juvenile-detention center, where he remains. He was charged with making a false report of a threat of terrorism, a felony that is punishable by up to four years in jail.

How great is that?

Let’s hope this punk get’s what he deserves- PRISON!

Another Democrat Was Just Arrested For Another Pay to Play Scam, This One, Allegedly Run By Fall River MA Mayor Correia