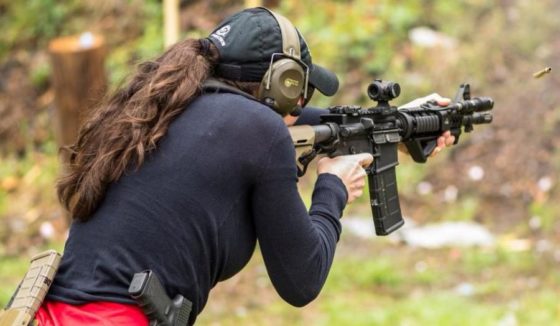 A Georgia state lawmaker said she didn’t want to take guns away from Americans, but she also supports legislation that would seize guns from Americans.  Likely missing a dictionary and basic common sense, Erica Thomas still expects us to believe that the government isn’t coming for our guns.

During an interview with Tucker Carlson, Thomas claims to not be talking about “taking the guns from law-abiding citizens, I’m talking about a ban on assault rifles. We are not trying to promote a militia. What war are we going at that we need assault rifles?” But Carlson quotes the bill Thomas herself said she supported, which states, “The Georgia Bureau of Investigation shall seize and take possession of any assault weapon, large capacity magazine, armor piercing bullet or incendiary fifty caliber bullet.” Carlson then asks how that confiscation will be received by hundreds of thousands of law-abiding gun owners in her state and in typical democrat fashion, can’t answer what a “seizure” of guns from law-abiding citizens who don’t want to give up their morally acquired property would look like.

Then the conversation between Carlson and Thomas eventually drifted into gun statistics,and The Daily Caller co-founder wondered why Thomas wasn’t calling for a ban on handguns since they are responsible for the majority of gun deaths in America.

“Don’t demagogue it with me. I am not downplaying the significance of anyone’s death,” Carlson asserted. “Since assault rifles, relatively speaking, cause few deaths,  handguns cause the overwhelming majority of deaths, why are you not calling for banning handguns and seizing and taking possession of handguns…if you care so much about gun violence?”

Instead of answering the question, Thomas decided to turn it around on Carlson, insisting, “I would ask you the same question. Would you call for a ban on handguns? No, you wouldn’t!” she exclaimed. “So why can we not put a ban on assault rifles? That is the question. Why not?” This is what gun owners have to deal with almost daily:  Overly emotional outburst from those who know next to nothing about guns and the way the work, and even less about the statistics they claim to care about changing.

After several more seconds of the pair talking over one another, Carlson finally cut Thomas’ mic and video feed, stating, “I give up, I’m trying to ask you adult questions and you don’t want to answer them.”

Democrats often wonder why we can’t have a civilized discussion about guns, and this video boldly declares the reason why.  There’s little, if any, respect for facts or basic human rights when it comes to a person who wants more gun legislation.  One simply cannot have a civilized discussion with anyone who seeks to erode the rights of others based on misinformation and fabricated statistics.

Tucker: If there’s one lesson of this weekend’s ‘March for Our Lives’ events, it’s that ending violence in America is easy, so easy that even children know how to do it.We ought to do our best to find out why school shootings have risen. Self-righteous kids screaming at you on TV over the weekend don’t help at all. #Tucker

But Carlson presented an interesting question while Thomas was talking.  “What if Americans don’t want to give up their guns?”  There’s still not been a rational and logical response on how that would be handled from any Democrat; politician or otherwise.