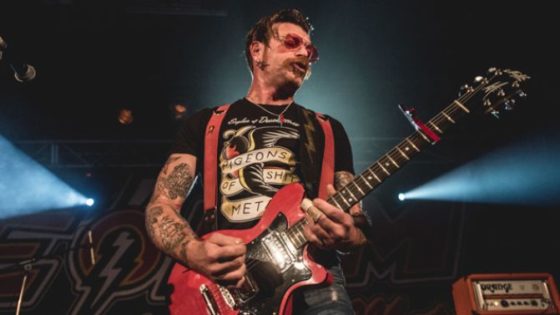 The lead singer of the Eagles of Death Metal band is calling out the Parkland students for being “disgusting vile abusers of the dead.” Jesse Hughes, the rocker who survived the Paris mass shooting which left 90 dead in a nation with extremely harsh gun control regulations, is joining the rest of us in becoming disgusted by the demands to remove basic human rights from everyone because of one psycho.

Hughes has been against grandstanding on the bodies of the dead long before the Parkland students decided they’d give it a try to thunderous applause from the media. The lead singer who once said “until nobody has a gun everyone has to,” posted his rant about gun control activists on Instagram.

“Obviously … The best thing to do to combat chronic abusers and disregarders of the law (like the law against Murder) is to … pass another Law,” Hughes wrote in a series of Instagram posts that have since been deleted, Rolling Stone reported. “But before we pass this law we’re going to denigrate the memory and curse ourselves by exploiting the death of 16 of our fellow students for a few Facebook likes and some media attention.”

Hughes then referenced the 2015 attack in Paris, in which his band was performing at the Bataclan concert hall when Islamic extremists’ opened fire on the crowd that left 90 dead, for “how well civil rights abuses as it concerns firearms helped to protect” those in the tragic massacre. Of course, human rights abuses (gun bans) didn’t stop more human rights abuses (mass murder) from occurring in Paris.

Of course, gun control activists only want one thing: all guns. They understand that as long as people are armed, they can tell these tyrants “no.” Once the guns are gone, people may only comply when told to. We could ask the Jews in Nazi Germany how well that worked…oh, no, we can’t…

But Hughes actually understands this and looks at it from a logical point of view, rather than an emotionally driven child-like one. “As the survivor of a mass shooting I can tell you from first-hand experience that all of you protesting and taking days off from school insult the memory of those who were killed and abuse and insult me and every other lover of liberty by your every action,” Hughes wrote.

And the musician didn’t stop there. He went on to detail how “pathetic” and “disgusting” the survivors of the Parkland mass shooting are acting. Hughes criticized the students at Marjory Stoneman Douglas High School for demanding gun control after a gunman killed 17 students and faculty members on February 14 for “playing hooky at the expense of 16 of your classmates’ blood,” adding that, “it might be funny if it wasn’t so pathetic and disgusting.” Huges continued saying, “Long Live Rock’n’Roll … and may everyone of these disgusting vile abusers of the dead live as long as possible so they can have the maximum amount of time to endure their shame … and be Cursed …” And with that, Hughes concluded his Instagram tirade.

We couldn’t agree more.  Not one single human being should ever be expected to give up their rights for actions they didn’t commit. It would be nice if the Communists of the world could comprehend this simple moral statement. Yet if they could, they wouldn’t be Communists.