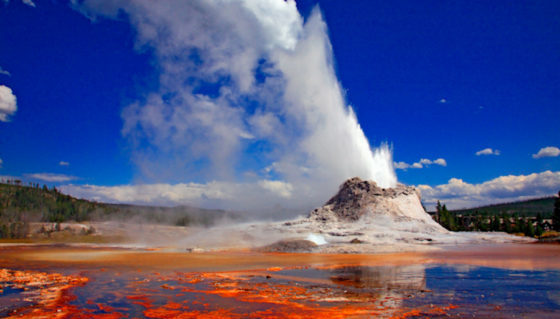 The geyser can shoot water more than 300 feet during significant eruptions and the park service made the announcement about the world’s tallest active geyser on Friday,as geologists compared the accounts to thermal sensors in the area. It was determined by scientists that it “could be a series of minor eruptions,” as opposed to one big eruption.

A series of earthquakes have been rumbling underground over the past few months, with as many as 200 recorded in a matter of days. The volcano is “under strain” according to some experts but researchers still continue to say not to worry, because the Steamboat Geyser’s eruptions had little connection to a volcano like Yellowstone. Using Global Positioning System, borehole tiltmeters, and borehole strainmeters to measure minute changes in deformation at Yellowstone, David Mencin and Glen Mattioli said: “the strain signal is larger than would be expected if the crust under Yellowstone were completely solid”.

Historically, the geyser has gone anywhere from four days to 50 years in between eruptions. Unlike its counterpart Old Faithful (named for its predictability) and a favorite attraction, the Steamboat Geyser is far from easy to predict.  It can go 4 days or 50 years between eruption, the last time being in 2014.

Yellowstone National Park contains more than 10,000 thermal features and sits on top of the world’s largest volcano, capable of sending 2,000 times more matter into the sky than the Mount St. Helens eruption. The last volcanic eruption at Yellowstone was 70,000 years ago.

According to the Casper Star Tribune, Jacob Lowenstern, a former scientist in charge of the Yellowstone Volcano Observatory explained the likely reason for the eruption.  “Their [geyser] plumbing systems are in the upper few hundred feet of the Earth,” he said. “As you get hotter and hotter and deeper and deeper, the permeability and ability of water to move around shuts off. There’s not a whole lot of connectivity of the reservoirs once you get deep.”

The park hasn’t had many inquiries from geyser watchers yet, said Vicki Regula, a public affairs assistant, though the 2014 eruption drew plenty of viewers. “It was magnificent to see,” she said.

We hope you found this interesting!