One pilot and one weapons systems officer ejected from the twin-engine jet, which crashed around 4:30 p.m. on final approach to Boca Chica Field at Naval Air Station Key West, the Navy said in a statement. A source told Fox News that the jet was flying back on one engine when it lost the other at low altitude.

Cmdr. Dave Hecht, a spokesman for Naval Air Station Key West said the pilot and a weapons system officer on board were able parachute to safety. Hecht said the officers were rescued from the water and taken to Lower Keys Medical Center for treatment.

The “Fighting Black Lions” of VFA-213 are assigned to Carrier Air Wing Eight which is currently assigned to the carrier George H.W. Bush.

Hecht did not describe the extent of their injuries.

Photos from the scene show a rescue helicopter hovering over the jet as it sits overturned in the water. 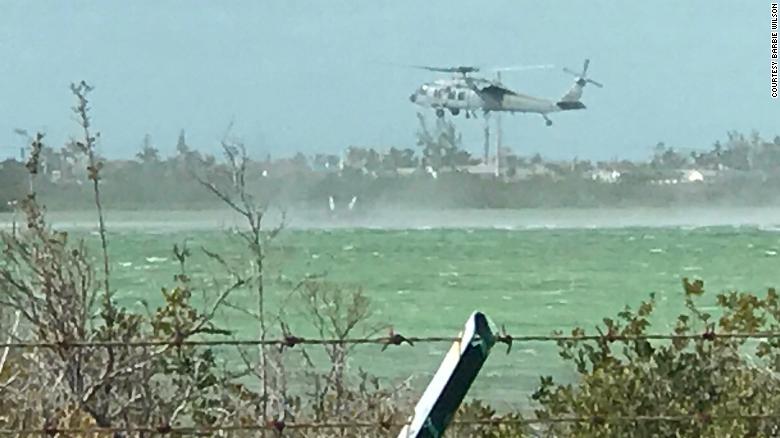 Barbie Wilson took this photo after witnessing the crash. She said she saw it roll, explode and go down. CNN

“Naval Air Station Key West emergency services are on the scene of an F/A 18 Super Hornet crash that occurred about 4:30 p.m. off of Boca Chica Field. See the attached release from Naval Air Force Atlantic.

“These jets have been flying all day. I live in the neighborhood and so one was flying over. Then it went a little sideways, then I saw fire, and then it just literally dropped out of the sky,” Wilson said. “It was like something out of a movie.”

Both crew members, based out of Naval Air Station Oceana in Virginia Beach, Virginia, were taken to the Lower Keys Medical Center. There was no immediate word on their condition.

“An F/A-18F Super Hornet from VFA-213 crashed on approach to Boca @NASKeyWest this afternoon at 4:30 p.m. Rescue crews recovered both aviators from the water; they were taken by ambulance to Lower Keys Medical Center. The jet was on a training flight; cause under investigation.”

An F/A-18F Super Hornet from VFA-213 crashed on approach to Boca @NASKeyWest this afternoon at 4:30 p.m. Rescue crews recovered both aviators from the water; they were taken by ambulance to Lower Keys Medical Center. The jet was on a training flight; cause under investigation.

A marina owner in the Florida Keys told WPLG that the Hornet jet caught fire mid-air, then crashed. The Navy stated the F/A-18F was conducting a training flight.

The Super Hornet is a twin-engine fighter jet that is larger than the single-seat F/A-18 Hornet.

The crash remains under investigation.

BREAKING News Out Of Florida… (Video)